Following an enjoyable, inevitably seafood-including meal near Plymouth Harbour and drinks til late, I must admit to being very tired open entering Day 3 of the conference, but just about made it through…

Filipa Moreira (I. U. de Lisboa, Portugal) placed Bond in the context of Portuguese cultural history. She mentioned how Fleming had stayed at the Palacio Estoril Hotel – to the west of Lisbon on the coast – in 1941, also using its casino, which yielded some of his later writing. During WW2, Portugal was officially neutral, which reminded me of Rui Lopes’ paper from Spying on Spies last year. Moreira explained some further influence of Portugal on Bond, with Guincho Beach proving a setting in On Her Majesty’s Secret Service (1969). 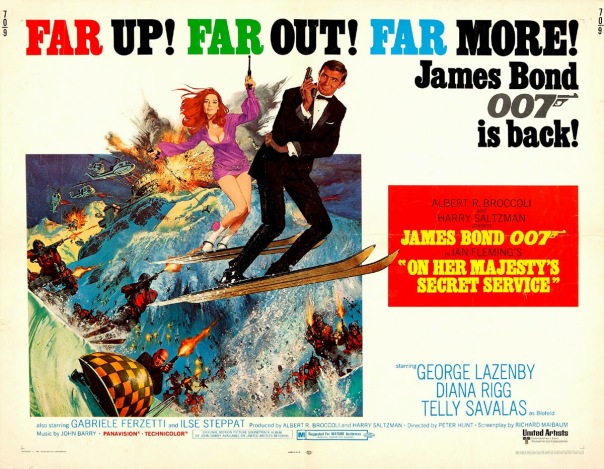 Moreira located Bond as ‘the most popular figure in entertainment’ with repetitive narrative structures important to how Fleming established his archetypal hero. She identified product placement as a significant part of the series’ persistent appeal. Using Galician and Bordeau’s four category model (2004) of how product placement is used in films (1. Verbal/hand placement, 2. Implied endorsement, 3. Signage, 4. Clutter), she argued it allowed the series to develop throughout time and adapt to changing tastes.

We were then treated to some revealing cultural history in the shape of the Whicker’s World ‘James Bond Special’ (TX: BBC-1, 25th March 1967). This documentary was of Pinewood Studios in the time of You Only Live Twice’s making. Whicker’s phrases – such as “a modern fairy tale”, “space age gubbins”, “the Bondwagon”, “Bondiana”, “no message to sell” and “like Kleenex!” – amounted to a smugly indulgent, supercilious reveling in the trivial nature of pop culture and Bond’s amorality. 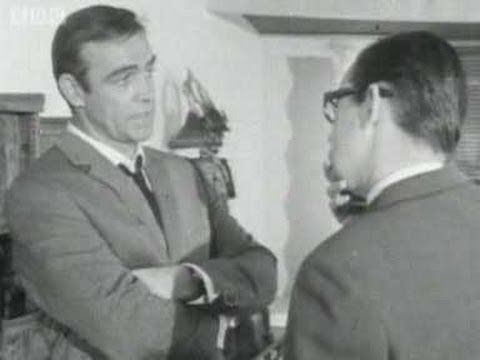 Connery’s appearance showed how comparatively low-key the nature of celebrity was in 1967, compared with 2016; he comes across as down to earth and mildly embarrassed by the absurd level of media attention he was experiencing. He also focused on how the books ‘lack humour’ and how he liked how the films increased it.

There wasn’t time to watch the whole programme; then, a Q&A pertaining to Moreira’s paper and the Whicker programme. Alan ‘Gus’ Burton referred back to his own paper – the lineage of 1964-73 British spy films – and how Hammerhead included location usage of Lisbon to signify the exotic.

Mention was made of the democratising impact of brands on culture, from the 1960s onwards. This appearance of luxury could be compared to the supposed ‘privileging’ of audiences’ being able to vote for ‘talent’ on Hughie Green’s TV shows in the same era, as Joe Moran has detailed in his excellent article for History Workshop, ”Stand Up and Be Counted’: Hughie Green, the 1970s and Popular Memory’.

A delegate highlighted that items like Vesper Lynd (played by Eva Green in the 2006 Casino Royale)’s necklace will set you back £2000, showing money’s lack of democracy. There was discussion, linking back to Felix Thompson’s Day 1 paper, of how the programme showed a pre-mass tourism age – with Whicker’s formulaic parade of wealthy people and foregrounding of luxury. The almost parodic silliness of Whicker’s persona perhaps chimed with the fact that YOLT was more negatively received, with many film critics discussing the formula as growing ‘stale’. Cultural change was commented on: casinos are now seen as tacky. There was juxtaposition of the worldly, urbane Roger Moore with Daniel Craig in CR – ‘the first Bond to be drunk on screen’. This was seen as influenced by the Bourne films, with Jason Bourne’s ‘grim and gritty lifestyle’ – at least in the early films – being anti-Bondian. Some anticipation was evident in the room for the new Jason Bourne (2016).

The next panel included myself and was all a little rushed, with lunch on the way! Both papers made use of video matter. Toby Manning began by showing clips from Smiley’s People (1982) and US drama series Homeland (2011 – date). His clips proved that dialogue in the latter was practically lifted from the former, eliciting belly laughs from conference goers… He contrasted the former’s advocating of détente with the latter’s anti-Iranian ‘terrorist’ hawkishness. Manning argued that the JLC TV adaptations provide a ‘source book, a template’ used by what he described as the ‘trashier’ Homeland. The adaptations reflected the ‘posh end of heritage’. He commented on the oddity of a ‘hate-fuelling’ Homeland using as its template the humanist hero Smiley and also considering that JLC was very critical of the ‘War on Terror’. 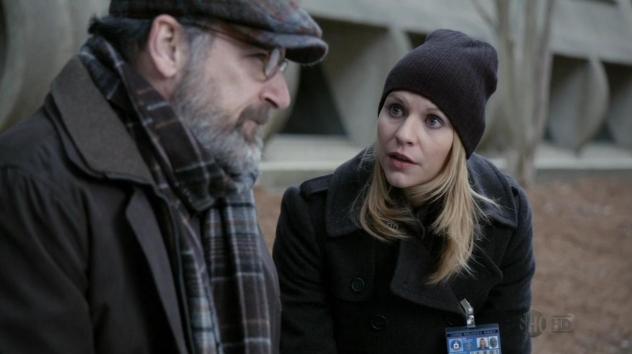 Manning described Saul Berenson as the best thing about it: possessing probity and Smiley-like moral scruples. By season 3, JLC was being channeled ever more explicitly, as an attempt by the show to lend itself ‘legitimacy’. Enhanced by his opposition to the Iraq War, JLC is often seen as the great liberal conscience; Manning commented that Homeland gets to seem liberal while being hawkish. Saul increasingly gets given Smiley’s lines. Carrie is said to enact all of the mad and bad stuff, with Saul being scrupulous initially but ultimately endorsing her actions. Season 3 channels The Spy Who Came in from the Cold and also quoted several other plagiaristic lines. He unfavourably contrasted Berenson’s ultimate concern being with his own career with Smiley’s wider sense of duty.

Manning began to conclude by criticising the Manichean idea that ‘the enemy’ is peculiarly inhuman and brutal. He said that it was one thing to portray Communists as barbaric – “You can argue with that and I do” – but that it was quite another to argue that Muslims are inherently barbaric and stated that there was a racist element at work in Homeland… He closed by saying that Smiley was a liberal hawk as early as in The Honourable Schoolboy; he executes Dieter Frei in Call from the Dead, is implicated in Liz and Leamas’ setting-up in TSWCIFTC and allows Bill Haydon’s death in TTSS. His ruthless pursuit of Karla is due to his loss of faith in détente. Manning’s excellent long conclusion ended with how the spy genre works to reassure us that the threat is real and to give us avatars like Berenson and Smiley, doing the job ‘as decently as possible in the circumstances’. These ‘reassuring hawks’ wring their hands on our behalf but ultimately enact the dominant ideological impulses.

Next was my own paper, available here. I argued, akin to Manning about Homeland, that the Christopher Hampton-scripted film version of The Honorary Consul ultimately endorses hegemonic politics, ignoring much of the notable counter-hegemonic discourse of Greene’s original 1973 novel. Unfortunately, the timings in the schedule were slightly off so there was no specific Q&A just for this panel. Though there was another good cold buffet lunch to go straight into! Wherein I discussed Greene with Felix Thompson, who mentioned how comparatively forgotten oppositional representations to the NATO hegemony now are…

Then, it was onto the very final panel of the day; this was delivered by three gents from King’s College London, with complementary papers on recent James Bond texts. Edward Lamberti began with analysis of the ‘shortest’ Bond film, Quantum of Solace (2008), using Judith Butler’s performativity theory and – as more of a curve-ball – J.L. Austin’s Speech-Act Theory (1955). This was the only mention in the conference of this theory that language brings things into being: “It’s a girl!” “We find the defendant guilty”. Some use was made of Sandy Petry’s Speech Acts and Literary Theory (1990) as a framework. 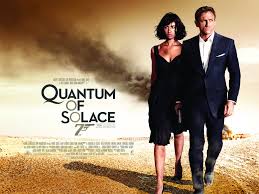 He developed an analysis of Bond in QOS as conveying a sense of loss and melancholy, mentioning how Cinema Paradiso (1988) reflecting a sense of the past as better. “A newly Bourne secret agent” elicited a groan or two! This grittier Bond’s isolation and alienation was argued to contain insight into the structures of society. Lamberti asserted that a ‘productive melancholy’ on Bond’s part reflected a rebelliousness seen as a threat by M.

The next speaker Christopher Holiday (KCL) focused on recent portrayals of London on screen seem fixated on showing it battered into oblivion. Use was made of Charlotte Brunsdon’s London in Cinema (2007) to develop his thoughts on a ‘London has fallen’ cycle of films, which included some recent Bonds. The US-made The Day the Earth Was Stopped (2008) was derided. A clip was used from G.I. Joe: Retaliation (2013). These films were more broadly contextualised in a lineage of British science fiction cinema: The Giant Behemoth (1959), Konga (1961) and Gorgo (1961) – the titular monster of whom was to some the ‘English Godzilla’ – and I.Q. Hunter was quoted on this tradition. 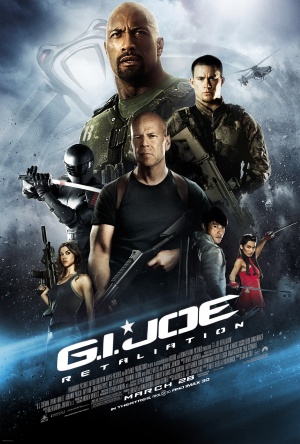 The true ‘London sequence’ was argued to have started with the relatively politicised V for Vendetta (2005) and Children of Men (2006), though key scenes in this latter film are in the UKIP-terrain of ‘Bexhill’*, East Sussex, though the detention camp scenes were actually filmed in Aldershot. PD James-adaptation COM is a very notable film, with satirising of nihilistic post-modernist neo-liberalism and an against-type casting of Michael Caine as a romantic hippie.

London was being used more, not just for British films, but by others – as British crews were experienced, now generally non-unionised and there was greater studio space.  Mention was made of a 2013 Telegraph article by John Hiscock, who seems to have written about the subject since at least the late-90s. 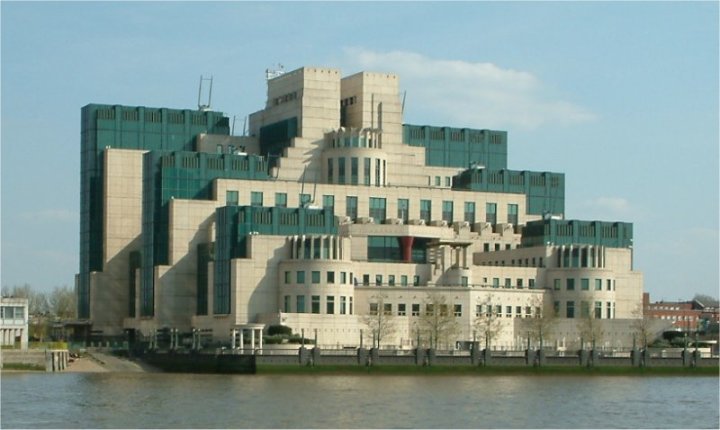 The SIS Building (1994) was used in GoldenEye (1995). Holiday discussed Craig’s Bond as being strongly aligned with London through his unveiling as Bond on a Royal Marine speedboat on the Thames on 14th October 2005. He showed this clip and it was undoubtedly powerful iconography, no doubt intended to counterbalance Craig’s more working-class, northern origins with patriotic ballast.

Ethical issues were discussed, with relation to the criticism London Has Fallen (2016) itself had received from 7/7 victims’ families for its ‘insensitivity’. Holiday referred to the most recent JB film SPECTRE (2015) as ‘haunted cinema’, a sort of prelude to the next paper.

Speaker 26, the last of the Conference, was Alexander Sergeant (again KCL) who discussed the function of the “Bond girl” as a Structuring Archetype in SPECTRE, according to Jungian spectator theory. He said he wanted to steer away from the common – in the 1970s-90s, anyway – field of Lacan/Metz/Freud psychoanalytical approaches to film. Can’t say I blamed him, really! 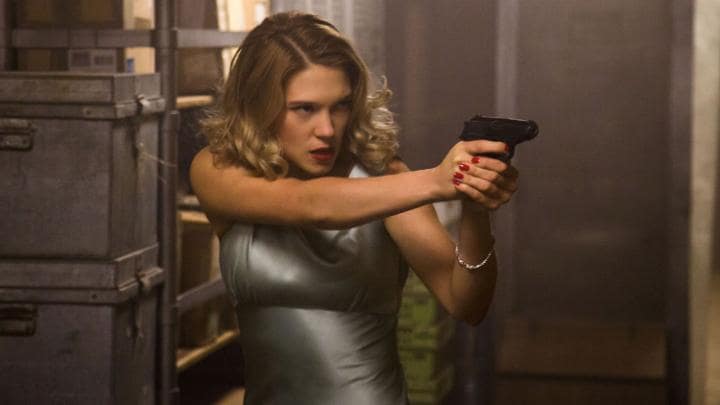 His paper focused on individuation and how archetypes have roots in the collective unconscious. Dr Madeleine Swann – a psychologist working in the Austrian Alps – in SPECTRE is referred to as a contradiction to the ‘Bond Girl’ archetype, who along with Bond will have to return. Proust was referred to.

The Q&A incorporated all three KCL speakers, Toby Manning and I. Sadly, I can remember little of it but that I made a point about social class and the poacher character in Went the Day Well? It only remained for me to make my way to the station with some other delegates and go through a grueling nigh on nine-hour journey back to the north east!

Four days after the end of the conference came the Brexit vote.

*Bexhill and Battle UK parliamentary constituency is a rock-solid Tory seat, which even had a Tory majority of 11,100 in 1997, and is now over 20,000 with UKIP in second place. Both Stuart Wheeler and Nigel Farage – two of the most reprehensible influences in our body politic in the last 20 years – stood here and got in excess of 2,500 votes.

Broke the yolk, no joke

You and Me and the Continuum

The blog of Robin Carmody. Liberal humanist, reformed ex-Stalinist and former anti-anti-anti-Semite, melancholy Europhile and romantic-ruralist socialist. Londoner by birth, Kentish Man by upbringing, Portlander by adoption. "More like Roy Harper than Fairport Convention" - Simon Reynolds, 2003. May be the horsiest Leftie in the Anglosphere, but there are many horsier ones beyond.